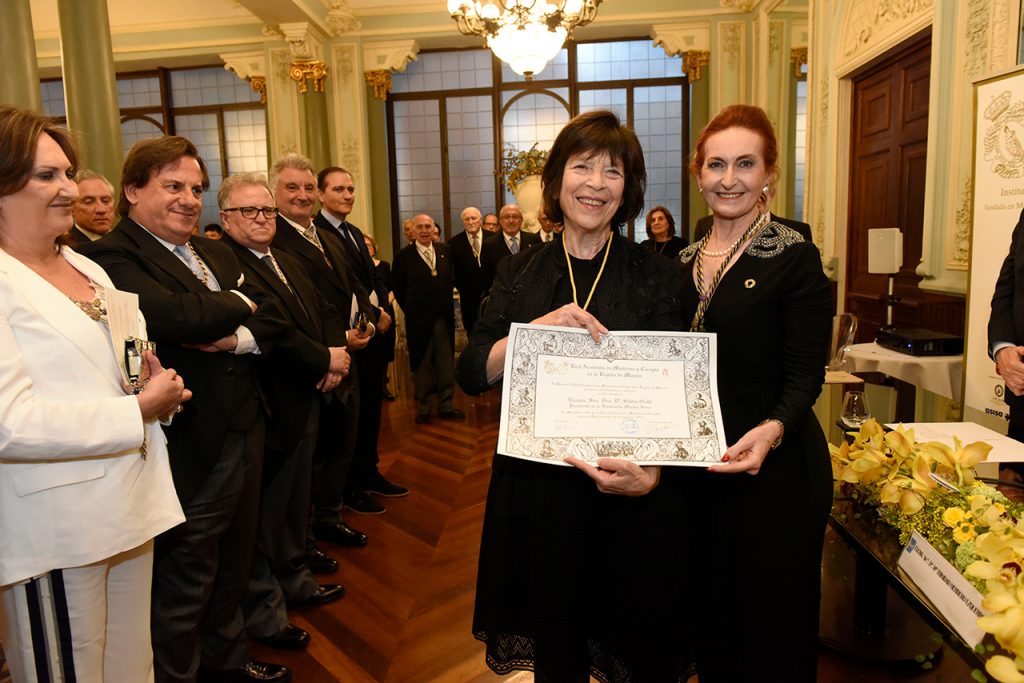 •This award is recognition of the hard work and dedication of Silvia Gold, President of the Mundo Sano Foundation, in changing the course of Chagas disease.

•Mundo Sano is currently running the campaign Not a Single Baby with Chagas, to ensure that all babies and women of reproductive age have access to diagnosis and treatment.

•Chagas disease affects 8 million people worldwide. In Spain, there are estimated to be between 50,000 and 100,000 Chagas sufferers. Globally, almost 9,000 babies are born with Chagas disease every year.

Murcia, 14 May. Silvia Gold, who holds a PhD in Biochemistry and is President of the Mundo Sano Foundation, has been awarded the Gold Medal by the Royal Academy of Medicine and Surgery of Murciafor her dedication and commitment to changing the course of Chagas disease over the last 20 years. María Trinidad Herrero,President of the Royal Academy, bestowed this recognition upon Dr Gold. The Gold Medal is the highest recognition afforded by the Royal Academy of Medicine and Surgery of Murcia and has only been awarded on 7 occasions in its 207 years of history. It is presented to figures whose professional careers are deeply rooted in the principles of cultivating and expanding medical and health sciences, and it is a source of tremendous pride that one of the previous awardees was César Milstein.

At the presentation, Silvia Gold expressed her sincere gratitude for this accolade from the 207-year-old institution, highlighting the work undertaken by the Region of Murcia’s Tropical Medicine Unit (UMT) as “inspirational, and a point of reference not only in Spain but all over the world”. Dr Gold also emphasised that “at Mundo Sano, we believe that eliminating vertical transmission of Chagas disease is an achievable goal, and is the first step towards wiping out Chagas completely”. That is why we have rolled out a global communications campaign called Not a Single Baby with Chagas. This is the first time we have used this language and launched a bold new message, which we believe in completely: that Chagas can be cured!” Silvia Gold wrapped up by extending her thanks to academy once again, and highlighting “the injustice of an illness for which medical treatment exists, but is not being accessed by sufferers. That is why, with the conviction that change is possible and with an attitude of optimism, we are determined to make this happen.”

As the event, Manuel Segovia Hernández, Head of the Tropical Medicine Unit at the Hospital Virgen de Arrixaca and a Professor in the Department of Genetics and Microbiology at the University of Murcia, outlined the significance of this recognition in an emotional speech which was succinct and well-structured, but above all, warm and deeply human. He also highlighted the productive partnership between the Mundo Sano Foundation, Murcia’s Regional Department of Health and the University of Murcia. This partnership, along with the efforts of the World Health Organization and the Carlos III Health Institute, has successfully positioned the region of Murcia as the first Spanish autonomous region with a plan in place for the elimination of congenital Chagas disease, boasting one of the world’s broadest diagnosis and treatment networks. In addition, the work undertaken by the Unit headed up by Manuel Segovia Hernández means that Murcia now treats the third-highest number of Chagas cases out of all of Spain’s autonomous regions.

In her closing address, María Trinidad Herrero, President of the institution, said: “There is no such thing as impossible. The human being can achieve anything. That is the message we take from our honoured awardee today; an awardee who embodies solidarity. Dr Gold, her team and her family were able to truly comprehend the problem posed by this disease, and tackle it with a comprehensive approach. It is a great privilege for the Royal Academy to be party to her generosity and creative intuition”.

Silvia Gold’s commitment to Chagas disease and other neglected diseases dates back to over 20 years ago, when she took over the reins at the Mundo Sano Foundation, created by her father, Doctor Roberto Gold. In 2010, when a shortage was announced of the medication used to treat Chagas, Benznidazole, Mundo Sano joined forces with the laboratory ELEA-Phoenix in Argentina and with Insud Pharma in Spain to commence production first in Argentina – where there are over 1.5 million Chagas sufferers – and later in Spain. The medication is now distributed in 21 countries.

Mundo Sano also facilitated access to treatment for Chagas disease in the US, where more than 300,000 people are affected, which is another huge achievement for the Foundation. In 2017, the US Food and Drug Administration (FDA) approved the medication,which was one of the greatest milestones in the recent history of Chagas disease.

In 2019, the Mundo Sano Foundation launched the campaign Not a Single Baby with Chagas, to raise awareness of the disease and ensure that all women of reproductive age and all babies born with congenital Chagas disease have access to diagnosis and treatment.

Following the progress made in reducing transmission by vectors and blood transfusions, the main concern is now to control vertical or congenital transmission, which is when the disease is transmitted by an infected mother to her unborn child. Every year, 9,000 babies are born with Chagas disease, one every hour,and most go undiagnosed and untreated. The campaign seeks to ensure that by 2030, not a single baby is born with Chagas.

Mundo Sano is a family foundation created in Argentina which contributes, through on-site research, to public policy aimed at enhancing the quality of life of people affected by neglected diseases, which tend to impact the most vulnerable members of society.
Since it was founded, Mundo Sano has been rolling out programmes and projects in line with three key areas of activity: transnational research, knowledge transfer and public private partnerships.

Chagas is a parasitic disease caused by the parasite Trypanosoma cruzi. It is transmitted to humans mainly from the faeces of triatomine bugs, which comes into contact with the skin when people are bitten by these blood-sucking bugs. It can also be transmitted by an infected mother to her child during pregnancy and childbirth (vertical or congenital transmission), through blood transfusions or organ transplants stemming from a carrier of the disease, or by ingesting contaminated food or drinks. Worldwide, Chagas affects 7.6 million people, including 1.2 million women of reproductive age. Every year, 9,000 babies are born with the disease. It is estimated that there are between 50,000 and 100,000 Chagas sufferers in Spain and 300,000 in the US.

How can I get involved in the campaign?