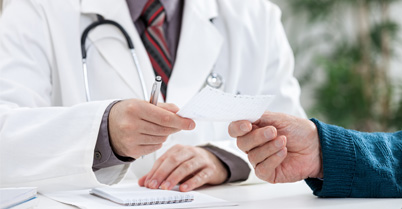 When a biosimilar drug is authorised by a regulatory agency, it means that it can be prescribed with guarantees over its efficacy and safety for all indications authorised in its summary of product characteristics. Therefore, a doctor may initiate treatment in a new patient with either the reference drug or a biosimilar. However, one of the questions to arise with the arrival of biosimilars on the market is whether doctors can substitute the original biological drug that is being administered for a biosimilar, or if they can be used interchangeably.

To clarify this issue, first it is important to fully understand what substitution and interchangeability actually mean; whilst they are very similar, they are distinct concepts which should not be confused. Substitution is the act through which a pharmacist replaces a drug with a similar one, without relying on the advice of a doctor or approval of the patient. Interchangeability, on the other hand, is the medical act through which a drug is substituted for a similar one, with the approval of the doctor and the knowledge and approval of the patient. Meanwhile, automatic substitution, another term used when talking about the switching from one drug to another, refers to the practice by which a pharmacist is obliged to dispense an equivalent and interchangeable drug in accordance with local or national regulations.

In each of these cases, it is important to stress the role of the doctor as the last link in the decision-making chain when choosing the drug which is most appropriate for the patient. However, in order for the doctor to be able to choose and prescribe the most suitable treatment, the regulatory bodies need to set out their stance regarding interchangeability and produce guidelines detailing when and how it is possible to carry out the exchange. In this regard, two regulatory bodies hold different stances regarding biosimilar interchangeability. On one side there is the Food and Drug Administration (FDA) from the United States, and on the other there is the European Medicines Agency (EMA) in countries within the European Union.

The approval of a biosimilar in the United States is established in two phases. In the first phase, the only requirement is that the biosimilar shows a basic similarity to the reference drug. In the second phase, where the product obtains the status of interchangeable, more rigorous safety details need to be provided, showing that the substitution of one drug for another comes at no risk to the patient. In January 2017, the FDA published a document outlining all the details and requirements that a drug needs to meet in order to be considered as interchangeable (1). The FDA also has the so-called Purple Book, which includes a list of biological and biosimilar drugs as well as those which have obtained interchangeable status (2). However, not all US states maintain the same stance on the matter. Whilst this regulation has already been passed in Florida and Indiana, it has been rejected in Texas and Arizona (3).

Contrary to the role of the FDA in the United States, the EMA does not have the authority to consider a biosimilar as interchangeable in European Union countries. Rather, each country is free to decide whether the substitution of one drug for another is permitted or not (4). Whilst some countries such as Austria and Portugal do not have any regulations in this regard, others such as Germany and Italy have clinical guidelines which prohibit automatic substitution, whereas Spain, Norway and Ireland have laws specifically prohibiting substitution (3).

France was the first European country to allow the substitution of biosimilars, albeit under certain conditions. According to Article 47 of the Law of 23 December 2013, the substitution of biosimilars is only permitted on the condition that a new treatment is started, the biosimilar belongs to the same pharmacological group as the prescribed product, and that the doctor has not explicitly prohibited, in writing, the substitution of the prescribed drug (5). In Finland, the Finnish Medicines Agency (FIMEA) published a document in May 2015 outlining their stance on the interchangeability of biosimilars (6). In it, they concluded that biosimilars are interchangeable with their reference products when under the supervision of a healthcare professional. However, they do not outline their stance on substitution. Finland’s stance on the matter is shared by other countries in the European Union. In the Netherlands, for example, biological products can be exchanged (regardless of whether they are original or biosimilar products) on the condition that suitable clinical monitoring has been carried out and the patient has been properly informed (7). In Germany, biosimilars can be used in the same way as the reference products to which they have demonstrated equivalence. This implicitly involves both the patients who have received biological therapy and those who previously received the original product (8). In Ireland, the Health Products Regulatory Authority (HPRA) indicates that if it is planned to change a reference drug for a biosimilar, or vice versa, the doctor administering the treatment must be involved; this means that there must be proper communication between the prescribing doctor and the patient, and between the prescribing doctor and the dispensing pharmacist (9).

In the case of Spain in particular, the Ministerial Order SCO/2874/2007, of 28 September, and the subsequent information note released by the Spanish Agency of Medicines and Medicinal Devices (AEMPS) on 24/04/2009 on “Medicinal products that should not be substituted by another medicinal product with the same active substance without express permission from the prescribing doctor” state that the substitution of one biological drug for another is not authorised, whether or not a biosimilar or reference drug has been prescribed. This means that the substitution of a reference drug for a biosimilar, or of a biosimilar for a reference drug, is prohibited. This prohibition covers both the hospital setting and the collegiate commissions that comprise doctors (such as the Pharmacy Commission), as none of them is able to assume the responsibility of the prescribing doctor for a patient. More recently, the Law on guarantees and rational use of medicinal products stated that “in the case of biosimilar medicinal products, the current standards contained in the specific regulation pertaining to substitution and interchangeability will be respected” (Article 90.5 of the revised text in Royal Legislative Decree 1/2015).

Studies are currently being carried out to assess the efficacy and safety of the interchangeability between a biosimilar and its reference drug. By doing this, the requirements established by many regulatory bodies for declaring a biosimilar as interchangeable will be able to be met.